“Cambridge Ecology is proud and privileged to have worked with a 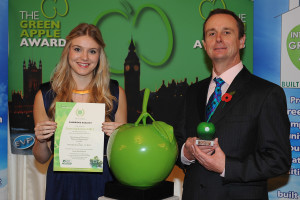 forward-thinking and successful project such as the Abberton Scheme”, said Darren Frost, Company Director at Cambridge Ecology Limited, based at Over in Cambridgeshire. “New utilities were necessary to address the need for water security and supplies, and have also benefited the environment and biodiversity. It’s inspiring to be part of this implementation, particularly on such a large-scale construction project.”

“It is rewarding to see the Abberton Scheme recognised by a wider public for receiving the International Green Apple Award.”

The Abberton Scheme won in the national campaign to find Britain’s greenest companies, councils and communities. It competed against more than 500 other nominations and was presented with their Green Apple Award at a glittering presentation ceremony in the House of Commons on 11 November 2013.

Cambridge Ecology Limited provided high quality and professional ecological support to Carillion Civil Engineering and Essex and Suffolk Water at Abberton Reservoir. The ecological support included practical guidance and advice ensuring important ecological features – such as making sure nesting birds that are fully protected by national and international legislation – are not affected by construction works, and do not delay the construction programme. The success has come in the shape of Avocet and Great Crested Grebe nesting at the site for the first time, and after a seven-year absence Lapwing have now returned to breed successfully.

The International Green Apple Awards began in 1994 and have become established as the country’s major recognition for environmental endeavour among companies, councils, communities and countries. The awards are organised by The Green Organisation, an independent, non-political, non-activist, non-profit environment group dedicated to recognising and promoting environmental best practice.